Leura is a small town on the main train line through the Blue Mountains National Park. About 2 hours from Central Station in Sydney and until recently, an area we hadn’t spent very much time in. We attempted the Leura to Katoomba route through Leura Forest a few weeks earlier, but ended up having to stay on the cliff tops due to hazard reduction burning in the Jamison Valley and missed out the forest. Having had a glimpse at the area we vowed to come back and give it another go.

A long weekend several weeks later was the perfect opportunity. This time we would already be in Katoomba checking out a few other trails so we decided to flip the route; starting in Katoomba and going in at the Furbar Steps, before coming back out at Leura Cascades to catch the train back to Sydney from Leura Train Station. 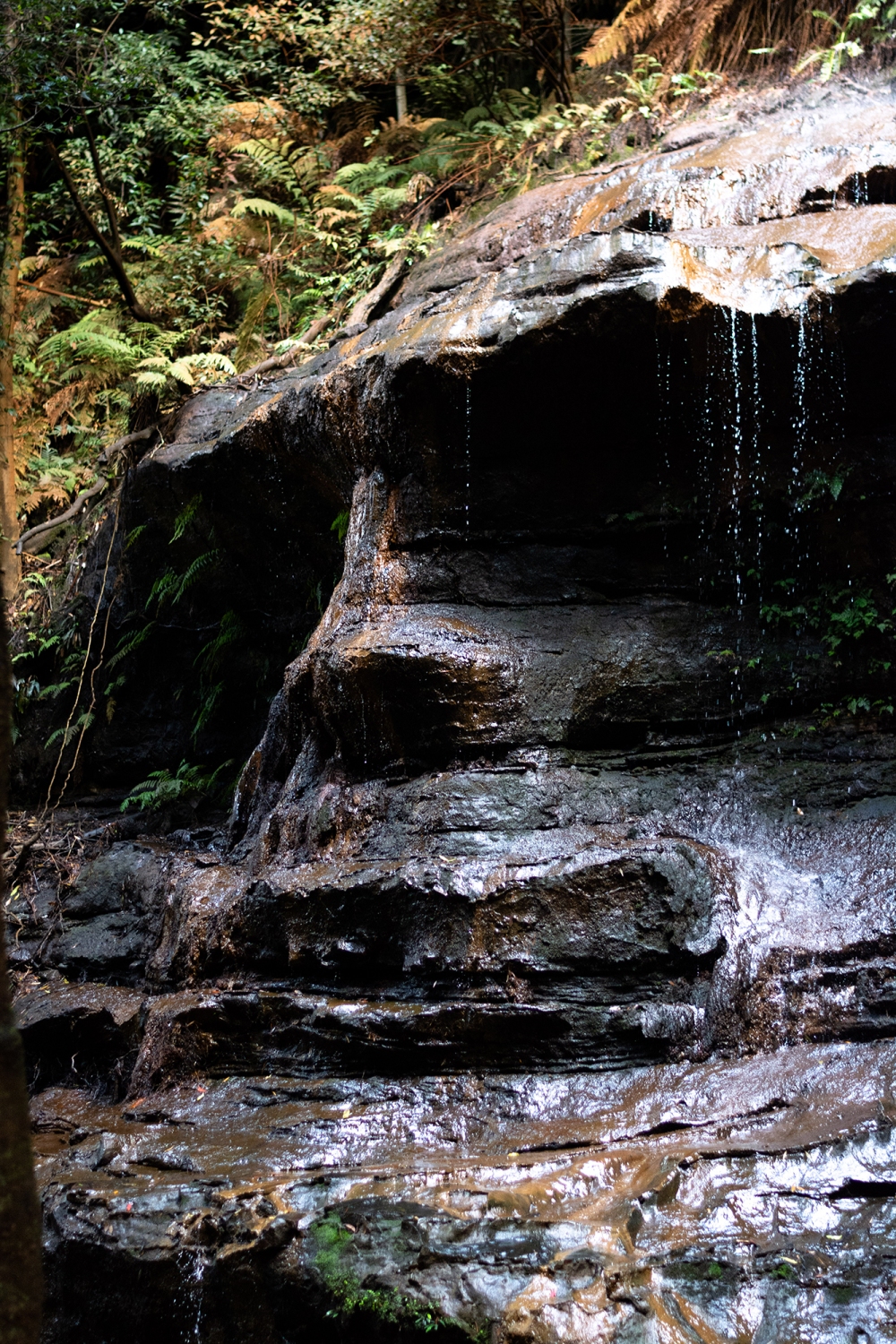 For the majority of routes we’ve done in and around Katoomba, the Furbar Steps are usually our final challenge to get back to civilisation. We’re normally at the end of a long day or two of hiking and more often than not battling the failing light. So it felt novelty to be heading down past Witches Leap and the Queen Victoria lookout on fresh legs and in good light, with a whole day ahead of us.

It turns out when you’re not distracted by fatigue and hunger there are some brilliant viewpoints of the Three Sisters on the way down the stairs. The Jamison Valley stretching all the way to the Kedumba Walls and the impressive Mount Solitary looming to the right of the vista.

At the bottom of the Furbar Steps we swung left and joined the Federal Pass Walking Track, aiming to pass beneath the popular Three Sisters and Echo Point lookout. The walking is fairly easy from the bottom of the steps, gently undulating and giving some glimpses of the valley through the trees. Keep your eyes and ears open for Crimson Rosella in the upper branches, usually in pairs and always contact calling to each other.

We eventually came to a fork in the road with some stone work and benches. The perfect spot to have some lunch and watch the Thornbills and Spotted Pardalote chase each other through the Eucalypts.

We went right and ended up walking through possibly the most amazing bit of forest we have experienced yet in Australia. The trees were full of Bell Miners in full song. Hundreds of them, chiming around us. The forest is a mix of Eucalypts, ferns and low scrub, with some truly epic trees seemingly holding up the cobalt blue sky above us. Several times we passed Bower Bird nests, complete with blue trinkets collected by the male to attract females who scampered around in the lower story trying to get a better look at his handy work.

Eventually the relatively level track started to turn upwards and we began to climb out of the valley along the Amphitheatre Walking track and then Leura Cascades Walking Track. Several times we stopped to enjoy the mossy, fern lined waterfalls scattered along the route. A decent amount of ‘up’ later and we emerged onto Cliff Drive and followed the sign posts back to Leura Train Station for the journey home.

The Leura Cascades area has a pretty healthy number of walking tracks meaning you could spend a a good few weekends exploring the different combinations. The cascades and waterfalls themselves also make it a great spot for a hike after heavy rains. Just be sure to pay attention to any safety information and stay behind the fences.